In this interview we are pleased to introduce Biblioteca Judeteana Ramnicu Valcea, our partner in the project “Let’s Culture together”, aimed to scale and replicate our TwLetteratura Method in different European contexts thanks to the Tandem programme.

Looking at it from a distance, it could seem like an interrail experience: 18 months around Europe, discovering and thinking about the future of the “Old continent”, between hard working days in old Dutch prisons and dancing nights in eclectic German pubs. This is Tandem, but also something more. Organised by MitOst, Tandem is an opportunity for Europe, for its citizens, for that European sentiment that should make us aware of our deep and common cultural roots. Tandem is a European project to which any person with an innovative idea can apply by responding to an international call. At the beginning, sixty of us met in a European capital (Milan, in our case) for seven days of intense forum meetings. At the end of that week, these sixty people had to present a project idea to be developed with a partner chosen within that group. Here are 30 projects, in pairs – Tandem – that will participate in another call, to be funded in order to develop the collaboration with the chosen partner beyond their own geographical and mental borders. The future of Europe will come from active and aware citizens who not only will participate in the cultural production but will play a proactive role in it, too. The task of cultural managers is to think of and design the process that will foster the creation of what Pier Luigi Sacco has called and envisioned as “Culture 3.0”. The Tandem project, thanks to the networks of people and ideas built over the years, has become one of the most innovative and forward-thinking projects in the “Culture 3.0” field.

Cristina, could you introduce Biblioteca Judeteana “Antim Ivireanul” Valcea, its history and its activities?

Biblioteca Judeteana “Antim Ivireanul” Valcea has opened for the public use since 1950, and over the last 66 years there have been numerous changes, both in terms of location and collections management policy. Valcea County Library has a modern building located in downtown Ramnicu Valcea, in a cultural and educational area that includes three of the most important educational institutions, a philharmonic and two museums. Library collections respect an  encyclopedic criterion and consist of about 430.000 units: books, documents, periodicals, graphic works, photographs, maps. Annually, the library is visited by over 150 000 readers plus virtual users and participants in the events organized on different occasions.

The main function of the library in the community is to manage its document collections and make them available to the public. In recent years, the library has added value as to its role in the community by introducing new services in line with changes in society. Modernization, response to community needs, diversification of activities, staff development and introduction of technology are priorities for the library. Our library runs various personal and professional development projects in order to advise, guide and integrate people into society. By exploiting its collections in a professional and modern way, it has become a real content creator that provides information in new, original and modern forms, adjusted to current needs. Thus, librarians are now in charge with creating and editing publications, make video documentaries and publish a magazine about the library. All these facts demonstrate a continuing challenge in spreading culture across the community.

Valcea County Library has numerous study spaces, conference rooms, spaces dedicated to events and leisure activities. Permanently, the library organizes lectures, book launches, exhibitions, events in collaboration with various organizations. Moreover, the establishment of lasting partnerships with both local and national institutions and with European organizations has become a powerful tool in developing our library. In addition, the library is in charge of coordination and methodological guidance of more than 80 local libraries in Vâlcea County.

The library is based at Ramnicu Valcea, a city of 111.000 inhabitants, where the first paper mill and printing press in Romania were built during the 17th century. As a consequence, the city became a very important centre for culture. Is the role of the city still the same today, in particular thanks to the library’s activities?

Ramnicu Valcea is a city in southwestern Romania, in the region of Oltenia and, indeed, its cultural history is impressive. Here there was one of the most important printers made by Antim Ivireanul, who became the patron saint both of the city and the library. Moreover, the city is surrounded by numerous monasteries, where books had been printed and collected since the seventeenth century.

The city’s history is much older than the history of the library, but they certainly influenced each other. The city’s intense cultural activity carried out over time has led to the establishment of a library, and after its appearance, the library began to play an increasingly important role in the community. It is well known that in smaller communities, libraries have great significance. In small towns, like Ramnicu Valcea, there are not as many cultural, artistic and educational opportunities as in big centers, so the library takes on this task, providing the community a chance to participate in various events. In small towns, the activities done by several organizations in large cities are carried out by libraries, for instance.

Recently, if the city has made itself heard after the economic crisis we have just passed, the library has focused its attention on European programs and has developed a number of projects to support the community. These sharing experiences are materialized in the provisions of new cultural, educational and social services for the public. Thus, the library has become a very active cultural center in the community.

The library has a strong link with Europe: many activities are organized for children, for inclusion, for innovation and to involve foreigners. For instance, could you tell us more about the “Poesi Maskinen”, the project in which the library is involved with a Danish partner.

Most of the library’s activities are directed towards citizens, so we try to understand the community needs and put them in relation to European trends. The library wants to introduce new methods in the community, discovered in different libraries in Europe or developed during our international collaborations such as “From Education To Knowledge”, “Click to Career” and “Books Like Acting”, projects run successfully by the library.

Recently, the Valcea County Library has initiated a new series of projects in partnership with some European organizations which share the same cultural goals. “Turn on Literature” is a project launched in partnership with two other libraries from Denmark and Norway which aims to find new ways of promoting digital literature. Digital literature is a developing field that combines literary language with digital devices (such as computers, tablets, smartphones, digital platforms, software…) to create a modern literature. “Poesi Maskinen” – poetry machine – is a modern tool that allows participants to create literary texts, combining the words from selected digital texts, in order to obtain a new creation. The aim of this project is to reposition the library in order to meet the needs of modern users, in a world of increasingly digitized.

Many library’s initiatives are related to the discovery of new ways to use technology, the Internet and mobile applications in order to promote reading and to attract more and more visitors to libraries. This may seem a contradiction, because many technical discoveries allow much faster access and remote virtual collections of documents, but in fact, they complete the library’s services. The future role of libraries in communities will depend on the way we will manage this relationship.

Our two activities met thanks to MitOst and Tandem Europe. Could you please explain the project “Let’s Culture Together” between Valcea County Library and Associazione Twitteratura?

The project “Let’s Culture Together” is run in partnership by Vâlcea County Library and Associazione Twitteratura within the Tandem Europe Program and is prototyping an innovative method of mixing arts, literature and modern technology by exploring both the ideas contained in books and the book as a physical object, in order to create a new symbol for knowledge.

Even if the two organisation taking part in the project have different cultural backgrounds and are different, they share the same goal: reading promotion. They thus bring their different expertise and experience in such matter. The project is based on Betwyll, the social reading platform based on the TwLetteratura method, adding also an offline component and involving local communities. The expected result consists in a creative process of turning books into masterpieces: sculptures, graphics works, as well as turning old subjects into new ones. Both Italian and Romanian communities are challenged to read books and “tweet” them on a modern take. They highlight the subjects and bring the author’s vision to modern times, in their own interpretation. The artists turn books into sculptures and graphic works by means of contemporary arts. Using Betwyll, all the parts of a book are commented and illustrated, so the main ideas of the book become more accessible and easy for anyone to understand. 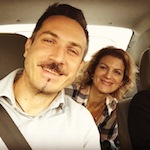 Cristina Oltreanu (@CristianaBiblio) was born in Ramnicu Valcea, Romania, and graduated at the University of Pitesti, Faculty of Educational Sciences. She is specialized in Library Science. After college, she attended several courses and became a project manager, a trainer, a mentor, all qualities that complement her profession. She has been working in Valcea County Library since 1991 as a 1st degree librarian. Over time she has worked for almost all the specialized departments of the library: collections management, documents acquisition and processing, indexing and reference, database, public relations, and now she is a librarian at the Projects and Programs Department. She initiated and coordinated a series of projects with a great impact on the community: projects fighting illiteracy, social projects for adults, CrossBook projects, projects promoting literature. She launched and coordinated several international projects for both the library and Casa Cărții Foundation, which operates under the umbrella of the library. She is currently partnering with Pierluigi Vaccaneo from TwLetteratura, as a cultural manager in the project “Let’s Culture Together” funded by Tandem Europe. She is involved in reading promotion programs on a daily basis, for which she creates various documentary films. She is passionate about reading, literary trips, traveling and painting.