Pavese in New York City: with my students, I tested an innovative approach to study Italian language and culture by reading and commenting on Cesare Pavese on Betwyll.

Studying Italian by “twylling” on one of the most famous novel of the Italian writer and poet Cesare Pavese, receiving feedbacks from the professor in real time. This was the main purpose of the social reading experiment I proposed to the students of the two Italian classes I taught during the Spring Semester 2018. Hunter College is one of the constituent colleges of the City University of New York, an American public university located in New York City.

I am a PhD student in the Italian Specialization of the Comparative Literature Department at the Graduate Center of CUNY. As an Italian mother tongue, I teach Italian grammar as an Adjunct Professor. There are four levels of language classes, and I taught Italian 101 (Beginners) and 201 (Intermediate I): in the 101 class I had 21 students, in the 201 I had 23 students, all Americans. Students choose to study Italian due to their family origins or because it is close to Spanish.

Since Italian is very difficult to learn, as professors we are encouraged to employ methodologies or teaching strategies that involve students to practice the language. For this reason, I offered my students up to 10 extra credit points on their final grade for their participation in a social reading project on Betwyll. Betwyll is a social reading app based on the TwLetteratura Method. I designed two projects, available only for the students: on Betwyll I published the beginning of the first chapter of Pavese’s La luna e i falò (The Moon and the Bonfires) and each Sunday, for four weeks, a prompt. The students had to reply to these prompts, focused on grammar or on the book content, in twylls, short messages of 140 characters to be published on Betwyll. I followed the syllabi and focused on different aspects of grammar and lexicon. I published the instructions of the projects in English and the prompts in Italian and I made clear that they could use dictionaries or other tools (also online), but that their twylls had to be published only in Italian.

In the Italian 101 class the prompts were:

With the first prompt, I tested their understanding of the book content and of the Italian words for family terms; the second and the fourth prompts were focused on grammar (singular-plural and prepositions), which were part of the syllabus, while the third one was focused on Italian culture (polenta being a typical meal, made with corn flour.)

In the Italian 201 class the prompts were:

The first prompt focused on the geography of Italy, the second one tested the comprehension of the text, especially the contrast city/countryside (relevant in Pavese and in one of the chapters of their textbook), the third one asked them to employ the conditional to speak about themselves, and the fourth one focused on the adoption policy, asking them to compare the situation described in the book with the one in their own country (and using a specific grammar construction.)

The project: an evaluation 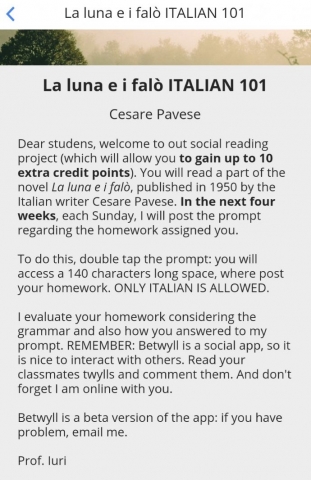 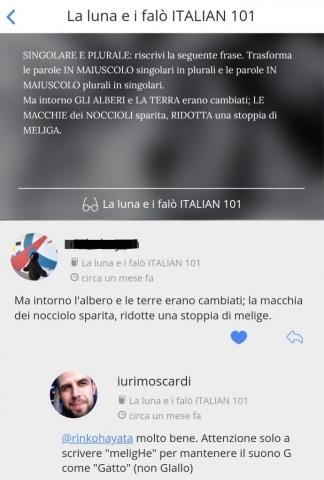 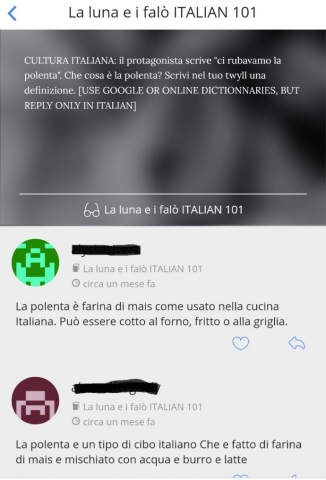 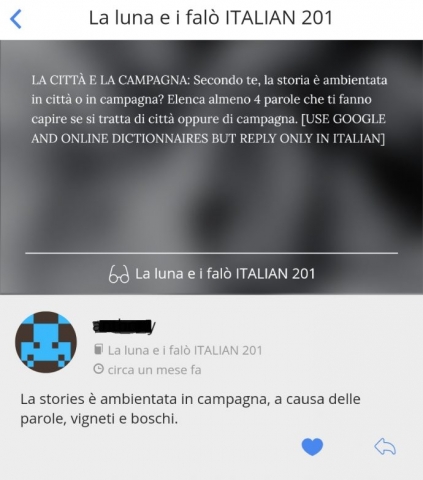 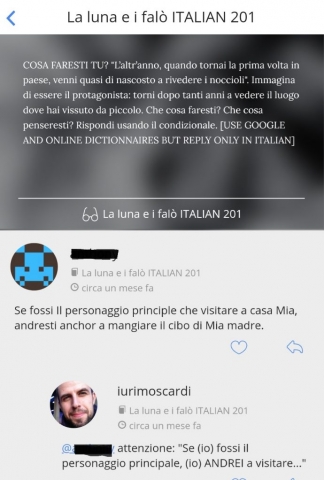 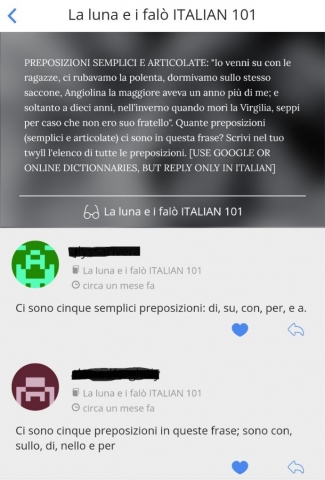 The prompts were focused on specific questions, so the students provided clear and specific replies, which were easy and quick to evaluate. More importantly, the project actively involved the students who tend not to participate in class: with Betwyll, I could better understand their level of proficiency. From a pedagogical point of view, I relied on the “learning by doing” principle: students had to search for information (about Italian geography, for instance, or culture, or the current adoption policy in the US) and to use the correct grammar form to communicate such information. Betwyll allowed me to focus on grammar and on the book content or culture, which often overlap. Finally, I established the duration of the project, giving students enough time to prepare, to find information, and to use the correct Italian grammar forms. I followed their participation and progress on Betwyll step by step: being a Betwyll user, too, I could give them feedbacks in real time, and the students usually replied to them with other twylls where they corrected their mistakes.

Iuri Moscardi (@IuriMoscardi) – Born in 1986, he graduated in Milan with a thesis on Cesare Pavese. He discovered TwLetteratura thanks to Pavese, one of the first authors to be read with this methodology. He believes that TwLetteratura is an innovative approach to literature: for this reason, after a MA in Italian at Indiana University (Bloomington), he started his PhD at CUNY focusing his research on TwLetteratura as a new form of the reception. He is a project manager for TwLetteratura, he writes on journals and newspapers, both on paper (La Stampa, Giornale di Brescia) and online (Il Lavoro Culturale, La Voce di New York, Esquire). During his free time, he reads and supports Juventus. His blog has the curios name of Il Tubero (the Tuber).