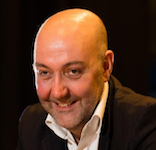 An interview with Dan Anthony, the author of the two books on which the TwLetteratura Caerffili Creative Collaborations project is based.

At the heart of the Creative Collaborations project we launched last September in South Wales there are two books of yours: The Rugby Zombies – Sombis Rygbi and The Bus Stop at the End of the World. What are they about and why were they chosen for this peculiar project?

As the person who wrote these books, it’s not really for me to say why they were chosen. In all my stories for children I try to combine pacey, imaginative adventures, a strong sense of humour and hint of danger. Very often my stories for children involve the modernisation of myths: zombies playing rugby, ancient spirits from the underworld arriving on busses, in these cases. I hope they chose the books because they, and children, enjoy them.

The potential of social reading

From an author perspective, what is the added value of being able to interact on a book through social reading, i.e. using the Betwyll app and the TwLetteratura method?

That’s a funny question, because there is great value to encouraging children to engage with texts through social media and tweets. They are able to express ideas about books and stories both at a general level and at the level of the sentence, as they compose their twyll or tweet. The reason why the question is funny is that when I write my books the question I ask myself is: ‘how am I going to make this story so interesting that nobody is going to want to put the book down and pick up a phone.’ In other words, I see my stories as alternatives to watching to TV, playing online games and going on social media. Channeling these motivations back towards reading is a brilliant idea.

The workshops with the students

As part of this project, you had a series of workshops with the students of the three classes involved. What happened during the meetings? How was the interaction with the children?

I’ve just completed a series of three workshops in schools in South Wales exploring the Rugby Zombies story and the online app. I always enjoy visiting schools and these sessions were no exception. All of the year 5 classes I met were focussed, great fun and highly inventive. As well as trying something new for me (writing twylls/tweets which we could introduce into the text) we had time to explore the stories, and most importantly encourage the students to develop their own zombie stories. Children’s imaginations are much less constrained than adults’, so you can imagine the sessions were all great fun and they did, I think, encourage young readers and writers by giving them confidence in their own abilities.

What was for you the most challenging aspect of this project, so far? And the funniest one?

For me, as usual, the most challenging part of these workshops was logistical. It usually is, these are small schools and finding a way through the valleys of South Wales between them (with or without Sat Nav) isn’t easy. Luckily I arrived in time. The funniest and most enjoyable aspect of these sessions (which all took place in schools were children learn through the medium of Welsh) was the ability to learn more Welsh. The children taught me new words, new stories.
The best new word I learned was ‘llychlynwyr’ which means ‘viking’. If you don’t speak Welsh – try saying it a few times over and over. It’s not easy for beginners 😉

Dan Anthony was born in Cardiff in 1964. He studied History at UCW, Aberystwyth and has an MA in The Teaching And Practice of Creative Writing from Cardiff University (2010). He has directed and written many radio programmes for BBC Radio Wales and written short stories for BBC Radio 4 and plays for Radio 4’s and Radio 2. He has written widely for children and facilitates workshops on script and story writing for schools, colleges, organisations and universities. He teaches Creative Writing at Cardiff Metropolitan University.